Unfortunately, we can no longer continue to absorbing increasing costs and therefore must implement price increases across several categories of our catalog. We understand that this is not something any distributor, retailer or consumer desires, however in order for us to continue innovating and bringing the highest quality collectible supplies and gaming accessories to the market worldwide, we must adjust our price structure for long term sustainability.

Below is our upcoming schedule to implement such price increases. Please note that we have also adjusted the MSRP on most items to account for higher distributor costs.

Please note that our ability to honor current prices will be subject to inventory availability. Although we are currently carrying additional stock in anticipation of higher demand prior to the deadlines provided above, we cannot guarantee all orders will be fulfilled in full and we will not hold back orders at current price. 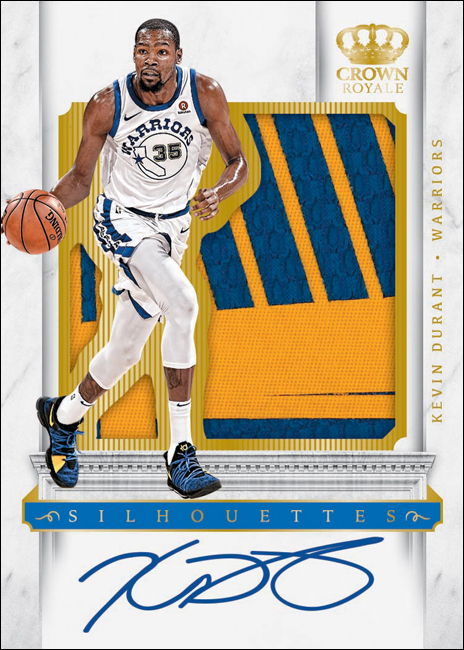 Has it really been that long? It seems almost unfathomable that Panini America’s popular Crown Royale Basketball franchise has been away from the market as a standalone product since the 2009-10 season. Granted, it has helped that some of the brand’s calling-card inclusions — the landmark Silhouettes and Rookie Silhouettes, Crown die-cuts and Panini’s Choice Award die-cuts — found a cozy home within the Preferred brand. But after way too many years away, Crown Royale Basketball is back!

Set to arrive in hobby shops across North America in late August, 2017-18 Crown Royale Basketballwill deliver, on average, one autograph and one memorabilia card in each hobby box (12 cards per box, 16 boxes per case). Longtime fans of the brand will relish the opportunity to once again collect the classic Crown Royale base set with traditional die-cutting and the stunning new Crystal parallel numbered to as low as one.

Additional highlights of the triumphant return are many and include . . .

We’ll have plenty more on the triumphantly returning Crown Royale Basketball in the coming weeks right here on The Knight’s Lance. Until then, enjoy this extended sneak peek:

All information is accurate at the time of posting – content is subject to change and approval. Card images are solely for the purpose of design display. Actual images used on cards to be determined.

The chase for this one is over. Card is pulled and listed on Ebay. See here: https://goo.gl/9MD3RE

Listing is one part. But will it sell? Or will buyers back out again. Happend recently multiple times.

Another Fake Card from Panini?

it looks like this player has never played the birmingham bowl. So the patch is not game worn.

Or have you seen Jaylen Brown with letter A as Patch? Brown is missing A.

Will it ever stop?

Last week, after being contacted by an autograph authenticator and following an internal quality control process, Panini America officials determined that a small quantity of Prescott autographs received for 2016 Prizm Football may not be authentic.

As an immediate precaution, Panini America began recalling all Prizm Football Dak Prescott autograph cards, stopping deliveries to 110 customers. Not all shipments were able to be recalled, however, and 167 cards were ultimately delivered to customers.

It was also discovered that some of Prescott’s Prizm cards are still unaccounted for.  Panini has committed to remanufacturing all the Dak Prescott Prizm Football cards, which Dak will sign to replace all the autograph cards within the Prizm collection.  All the remanufactured cards for the Prizm collection autographed by Prescott will feature a special Dak Prescott hologram to differentiate the new cards.

Panini is in the process of contacting the remaining customers affected and recalling the 2016 Prizm Football Prescott redemption cards to replace them. The company urges anyone offered a 2016 Prizm Dak Prescott autographed card not featuring the special hologram to contact Panini America immediately.

On Thursday, Prescott and Panini America agreed to a long-term extension on his exclusive autographed trading card agreement to commit to delivering quality and authentic products to collectors.  Prescott has autographed thousands of Panini America trading cards during his rookie season, has participated in multiple authenticated signing sessions and received additional card shipments throughout the year and returned them to Panini America to be incorporated into products.  Prescott and his representatives have worked closely with Panini during this process since becoming aware of the discrepancies and have no knowledge of how those cards were returned to Panini.

Dak Prescott is being accused of using a machine to sign his autograph for a memorabilia company instead of signing by hand.

Beckett Grading Services, which evaluates and values trading cards, has refused to verify the Dallas Cowboys quarterback's signature in a recent card set.

"They had a very machine-like feel," Grad said. "You could see the starts and stops."

The lack of natural flow associated with organic signatures led to Grad's conclusion that they were done by autopen, a machine that politicians have used to sign documents in bulk since the late 1950s.

"I immediately knew they were autopen," Grad said. "I've never heard of a modern athlete doing this."

It's possible that Prescott never saw the cards, as blank labels to be signed and even cards themselves are often sent to marketing agents first.

Attempts to reach Prescott, his agent Jeff Guerreiro and his marketing agent Peter Miller were unsuccessful.

In May, Panini said it had discovered that some of the autographed cards of Atlanta Falcons first-round draft pick Takkarist McKinley were not actually signed by him.

The company promised to send authentic autographs to customers who returned their signed McKinley cards.

As part of our ongoing efforts to improve the COMC marketplace and provide more value to our customers, we’re making changes to the services that we offer. To improve average processing times on our services, we’re changing our rates as of Saturday, July 1, 2017.

Your cards are valuable. In memories or hard cash. Read more how you can store your collection

Just days after the release date Ebay is flooded with 2016-17 Panini Court Kings. As one of the favorite sets of basektball collectors we can understand the reason why.

With Black Friday right around the corner, it’s time to announce the specials that COMC will be offering to both buyers and sellers this year! We’ll be offering THREE free sales promotions for sellers and free flat-rate shipping for buyers throughout the Black Friday weekend as well as a last chance for free shipping on Cyber Monday!

17-11-2016 ​Sales of Topps NOW have surpassed 500k in the first seven months.​ The company issued a sort of post season report focused on baseball where NOW launched as the first on demand trading card product. Cards only available for 24 hours proved to be populair with collectors. Read more here

13-10 On Card Authos in Absolute Basketball

10-10 Must check items for collectors

07-10 Collecting is not investing